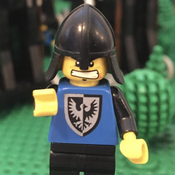 By Lego_Brick_Knight_K
54 comments
I took on a new challenge to build a King's Royal Soldiers Island Fortress/outpost/castle. This is the first soldier/pirate set I built with bricks and pieces coming from different LEGO auctions, and a pirate ship I bought several years ago. It is located on a small volcanic island and comes in the traditional white color with some yellow and black. It has many golden parts which give it a very nice appearance. It's based on a regular blue baseplate. The fortress is equipped with 4 red royal soldiers in the fortress and in the little boat 2 red royal soldiers are delivering supplies (fish, vegetables & fruits).
Some key features:
- 6 soldiers
- 3 movable canons (360 degrees)
- 1 red boat
- 1 big tower
- 4 flags
- 1 red parrot
- several plants around the castle
- brown-golden windows
- lots of gold colored pieces
There are many pirate/soldier theme fans out there and this set would be a great addition to any pirate/ soldier world. Its size is perfect for a new set and the building is not synchronic (see for example the 2 platforms and their bases next to the entrance gate).