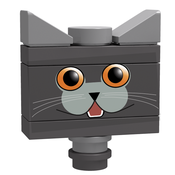 “Don’t vote for this” says GrumpiKitty. But we say you should. This pawesome idea is inspired by the four most famous kitties in all of the interwebs.

This famously media shy CelebriKitty, let’s her music tell her story. She hit the big time in 1984, years before ex-Vice President Al Gore even thought of inventing the internets.

Comes with a turntable seat that allows DittiKitty to swing from side to side and a hinge to allow her to work her magic.

* Keyboard only works with your own Imagination™. No returns or refunds.

The most talkative and LOLest CelebriKitty is HappiKitty. She first burst onto our screens and into our hearts when she starred in her first avant-garde work titled “I can haz cheeseburger?”

In interviews at the time she stated that “I eated it. A lot.” and gave said cheeseburger pi out of 5 stars (numbers aren’t her strength but eating pies are).

The fabulous animated “Pop Tart Cat” became a hit meme in 2011. He (or is it she?) is pure pixelated “pop” perfection and it’s high time the Lego universe (or at least Cloud Cuckoo Land) laid out the rainbow carpet for, um, her/him/it. Nyanyanyanyanyanyanya!

Her Royal Grumpiness has no time for you. Or a bio.

Comes with a regal pillow throne, crown, goblet, and extra dollops of cynicism.

Or, y’know, don’t. It’s up to you really. We do accept pity votes though.

We’re not Lego Master Builders, so all feedback is welcome. Except for GrumpiKitty who refuses to accept feedback.