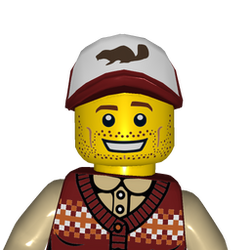 Off the coast of Brick Built City, lies a ship like none other. The Pacific Pirate Bounty! Featuring Captain Donald, and Michael The Treasure Finder, and Mrs. Pirate. Can you find the treasure before the Pacific Coast Pirates get it? There's lots to come! Note: This is not a minifigure series, this is just a big pirate ship. Note: This is not supposed to be an incomplete set. It's supposed to represent a Viking Ship.