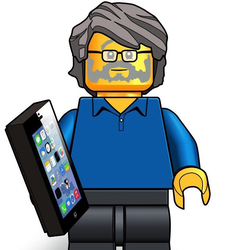 Look! Up in the sky! It's a playset! It's a board game! No, it's Superman: City of Metropolis, a two-in-one LEGO building set for fans of the Man of Steel!

With this project set, you can build the iconic buildings forming the skyline of Metropolis, home of the mighty Man of Steel! Construct the various city sections, and learn about them in the included Tourist's Guide to Metropolis. Visit the Daily Planet, STAR Labs, Ironworks, Lexcorp Tower, Suicide Slum, and other important locations in the City of Tomorrow.

In the playset are kits for 28 scale buildings and locations, and a set of baseplates for the Metropolis neighborhoods -- a total of 1044 bricks!

The Builder's Guide gives step-by-step instructions for construction of each building. Each set of building instructions features a short history, describing how it fits into the world of the Man of Steel. The book also contains a layout for placement of the buildings and streets on the four main baseplates making up the island of New Troy, the heart of the city of Metropolis.

Superman: City of Metropolis is a fun build and a wonderful display model and playset sure to please any fan of Superman. But that's not all...

Once you complete your model of the City of Metropolis, you can use it as the playing field for the included Metropolis Patrol LEGO board game.

In Superman: Metropolis Patrol, you can play as the Man of Steel himself and members of the Superman family of characters. In the game, Superman, Supergirl, Superboy, and Steel defend the city from a crime wave involving Superman's most famous foes. Even the mightiest heroes can't be everywhere at once, so the player must choose how to assign the heroes to patrol the city's hotspots and defend the citizens.

But this criminal crew is secretly being manipulated by Superman's greatest foe -- the ruthless industrialist Lex Luthor himself. Luthor has a master plan, and to win the game the Superman family must not only stop the crimes, but also gather enough clues to reveal Lex's real objective.

In true LEGO games fashion, the game will have simple mechanics that can be enhanced with optional special rules. This lets younger players enjoy the basic game first, then make it more complex and fun as they become more comfortable with the core game play.

I've made an effort in this playset/game to provide hero options for both boys and girls. Encouraging both girls and boys to explore all parts of the LEGO experience is very important to me. Kids (of all ages, from 9 to 90) will enjoy the chance to be a hero with an entire city depending on their powers, strength and cleverness.

I've loved the LEGO board games from the very first releases. As a game designer and developer with decades of experience, I admire the LEGO games because they combine the fun of building with games that can be enjoyed by all members of the family. The dual nature of this proposed set provides something that those that like lovely display models, imaginative playsets, and exciting board games can all enjoy.

I've also been hooked on microscale buildings since my introduction to this type of construction with the LEGO Master Builder Academy Micro Designer set. In this scale, entire skylines of buildings can be constructed. As a comics fan going back to the Silver Age, it was inevitable that I should want to use LEGO blocks to construct the familiar skyline of the DC Comics City of Tomorrow.

This LEGO ideas proposal has allowed me to combine all of these LEGO-centered ideas in one project that I think will appeal to a lot of fans. Please support this project if you like microscale building, superheroes, LEGO board games, or -- like me -- all of the above!