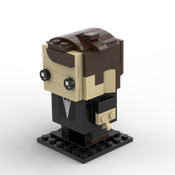 By Agent 14
22 comments
This is still based on S Force, but I have not yet shared much on these elusive villains. These Brickheadz are diabolical, so make sure to keep an eye open while you sleep. Here is more information on the backstory of the villains and what they may cause to your room!
Fischer Brown
In 1990, an experiment gone wrong with radioactive waste melted his right part of the face and killed him. He had slowly staggered towards the roof of his remotely secret lab, where he died next to the lightning rod. Almost 40 years later, a lightning bolt hit him and he revived.He was very confused of what was happening, and he started to wreck things around town. Police came and tried to tranquilize him, block him, and shoot him, but nothing worked. He blew away the barricades with a swipe of his hand, along with the bullets, and he exploded the taser with putting his index and middle finger on the side of his head. Then came S Force. Fischer Brown now was more angered than confused for no reason. After losing that battle with S Force, he swore revenge against S Force.
He will move things and mess your room, and hide things you treasure in the least imaginable places. He is also very hard to spot while he is on the move. He may be hidden in plain sight!
Ink kid
Ink kid is from a different dimension, and you know what comes with it, the government chasing you down to realize science experiments with you. He took it the I WILL FIGHT WAY and not the I will flee way. He uses ink to splat anything, and after Colossus finished analyzing it, he determined it was toxic when ingested.
He may create mysterious spot on your clothes, and may ruin or edit any nearby paintings. Your art projects won't be safe. And make sure you don't open your mouth while you sleep, or you may just get sick mysteriously...
Action Figure

Apparently when you mix action figures, old dust, bleach and cleaning solvents, and inter dimensional ink, you get a villain. Why he attacks S Force? Cough cough. Blame Noob123. He shove the guy accidentally, and he fell into all that except the ink, which Ink Kid later tried to throw ink at me, but he missed. And it hit him. Now he completely white, with the power to turn into any action figure in the world.

be careful, as he may be spying on you while you play with what you think are you toys...
And remember, a special surprise at 100 supporters!