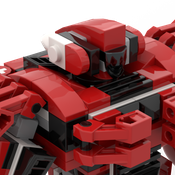 By P1m4n
25 comments
SilverHawks was one of my favorite cartoons when I was a kid. A team of human robots or bionics tasked with fighting crime from an evil alien boss who escaped from prison named Mon Star.
Here are the main members of SilverHawks.
QuickSilver, real name Jonathan Quick, he is the former head of the federal interplanetary force of eight. QuickSilver is bright silver in color.
Tally-Hawk, the bionic hawk. Is a spy hawk and can help attack enemies with a laser shot from its eyes. Tally-Hawk is controlled by QuickSilver via his watch.
SteelHeart and SteelWill, they are twins whose real names are Emily Hart and Will Hart. Emily is a designer and Will is a technician. These two twins have a strong inner connection, can feel each other. SteelHeart and SteelWill are dark silver. But in this LEGO idea, for SteelHeart I gave it a slightly dark silver color.
Bluegrass, is a colonel and a skilled pilot. He looks like a cowboy and wears a red bandana around his neck. Bluegrass is silver blue. Bluegrass has an electric guitar weapon that can fire a laser in the form of a melody. The Bluegrass electric guitar can also turn into a bird by spreading its wings.
Copper Kidd, is a volunteer from the planet Mimes. Has a unique voice like a whistle in a robot tone. Cooper Kidd is orange, he has a flying disk weapon stored on both thighs.
All members of SilverHawks have wings that can be stretched and can fly, except for Bluegrass, he does not have wings and serves as a pilot to fly their planes. Despite having no wings, Bluegrass can still help deal with enemies from their planes.
SilverHawks I built on this LEGO idea in eagle mask mode or combat mode. I built each character as detailed and as closely as possible, not forgetting the movement of each joint so that the character can pose naturally. I'm sure this idea can be a cool LEGO set because you can display it or collect it as action figures.