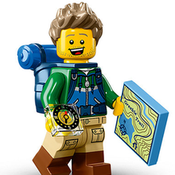 By Joshexplorer18
76 comments
Lost and forgotten, hidden by uncharted terrain; this temple holds secrets, dangers, and treasures of immeasurable wealth.
Once your LEGO explorers find the hidden temple, beware of the perils that await. A secret door can be used to gain access, but time has taken its toll on the temple and reduced much of it to rubble. Your LEGO explorers can use their skills to unlock the secret entrance, or repel through the top of the temple and gain access to the incredible treasure. Finally, after being lost for centuries, this ancient temple will be the discovery of a lifetime!
This LEGO build is a representation of an ancient ruin that has just been discovered. It comes with two minifigure explorers, as well as snakes, spiders, scorpions and skeletons. It also includes a repelling rope, and various jewels and coins. This build features a waterfall that runs through the ruins, and the entrance to the temple can be opened with a secret lever. This LEGO set is built for the adventurer in all of us!