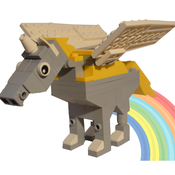 You've heard of it. You've seen it. You've played it. And you loved it. This. Is. Angry Birds!

With their first ever movie coming in 2016, there's never been a better time to release a Lego Angry Birds. A Lego set with a destructible tower, slingshot and iconic characters from the game would be the perfect start to a new franchise!

This proposed Lego set would be based around it's first ever level from it's first ever game, Poached Eggs. 1 pig and 3 birds, with lots of wood and glass to smash- what else would you want? You could make your own levels with the objects provided as well, the opportunities are endless! You could make a castle, a tropical beach holiday... Or pigs in a giant statue of a pig! You can create your own Angry Birds levels. Think about it! Not only that, you could make it from other series' as well.

Star Wars, Rio, Space- even create vehicles with the Bad Piggies! Loads of inspiration could be made from this set, including younger children!

Of course, this set wouldn't have to stop there. Red is classic, but the others could be built- Matilda, Blue or even the King Pig! But, none of this will happen without your support. If you love Angry Birds or great Lego Builds, Support Now!

P.S. Do you like RoadRunner as well? what about Mickey Mouse? Check out my other projects here: