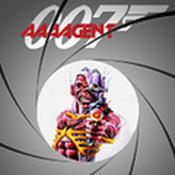 By aaaagent007
44 comments
This set is a tribute to the heavy metal band Iron Maiden and their visual universe centered around the mascot Eddie. As a huge fan of the band, I always wanted to make it meet my other passion for Lego, hence the creation of this set.
It covers the first four albums of the band, by representing each album artwork as follows.
The Iron Maiden album marks the first appearance of the mascot Eddie, facing a dark London street below a light post, and paved the way to an intense career debut.
Killers sees Eddie now having an axe, and finding himself in a new dark street of the London suburbs. Details like the buildings windows and the mysterious black cat are included as on the artwork.
The number of the Beast draws a completely different picture, with Eddie now being giant and controlling a devil puppet in an apocalyptic landscape. This is also the first album with Bruce Dickinson joining the crew on the vocals.
In Piece of mind, Eddie got caught and is finally prisoner in a padded cell, where chains limit his movements.
The set is presented as a collectible that will speak to all the Maiden fans around the world, who are known for their passion for Maiden branded items and will be keen on building these four universes to be displayed at home.