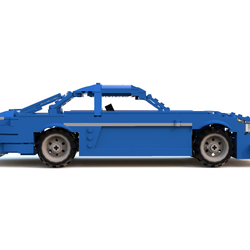 Thank you for viewing my project, the Alpine A110 1600S!
The Alpine A110 is a car produced from 1961 to 1977. It is most well known for being a very successful rally car, and in my opinion one of the most beautiful cars ever. The Alpine had many different options of engines available throughout the years it was produced. The model I chose to build has the largest engine ever available, a 1600 cubic centimeter straight-four. This engine produces 140 horsepower, and because of the car's low weight, lets the Alpine A110 reach 0 to 60 in just under 7 seconds.
My Alpine A110 model rolls and has opening doors and trunk. It also has detailed bodywork, interior, and engine. I believe that it would be a great addition to the current lego expert car line, and would look good anywhere.
Thank you for viewing my Alpine A110 1600S! Also, keep a look out for updates that will be coming in the future.
13
71
days left