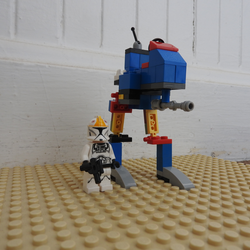 This Biplane is based off of early 20th century airplanes and is somewhat similar to the Sopwith Camel. I tried to make the model as realistic as possible without making it too large. I think that the landing gear turned out pretty well, but I may improve it later.

I like how the color scheme with the black and red turned out. What do you think? The Mini Figure is meant to resemble early pilots but could be changed later. I might try to add more engine details later too. This model has 250 pieces.