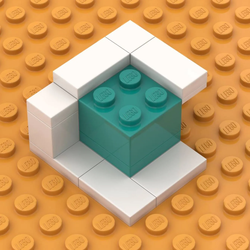 The legend of Blackbeard and his treasure was one of the most intrigueing tales from the Carribean. But the treasure had to came from somewhere... here we can see his pirate crew storming an imperial fort, which holds lots of gold gathered over the years.

The fort is fully playable, with a detailed and accessable interior. The design is inspired by real-life Carribean forts, and the coloring is the classic pirate series from the 90s style. Enjoy :)