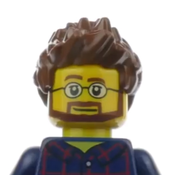 This project is the Chambord Castle microscale model.

The Castel of Chambord is one of the most emblematic monuments of the Loire Valley. Known and recognized throughout the world, it’s one of the most visited castel in France: more than 800000 visitors per year.

The building began in 1519 and the work lasted more than 30 years. At the beginning it was used as a hunting lodge and as a residence from 1650. It's composed of a square enclosure wall with round tower at each corner, a dungeon, a courtyard and is partly surrounded by water. The conception is based on a medieval castle. 440 rooms, 84 stairs, 365 chimneys and the central double stair describe this castle.

The size of this castle is spectacular and make it as the biggest castle in France: 156m long, 117m large and 56m high.

The garden is very considerable too: 5,440 ha surrounded by an impassable wall (for the animals of this hunting reserve). It was completely restaurated in 2017

This set is composed of more of 1800 pieces

I hope you will enjoy this set and supported it

Thanks for your supports !