Xenoblade Chronicles - The Bionis And The Mechonis 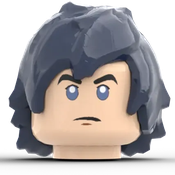 By Gameykibbles197
21 comments
This model is meant to be a replica of the Bionis and the Mechonis from the Nintendo and Monolith Soft game Xenoblade Chronicles. The game's world and characters are near and dear to both my heart, and the millions of fans worldwide. The Bionis comes with all its in-game locations such as; Colony 9, Guar Plain, Colony 6, Sarorl Marsh, Makna Forest, Nopon Village, Alcamoth, and Valak Mountain. The Mechonis' Sword includes Sword Valley and Galahad Fortress.
The included Minifigures, from left to right are; Reyn, Shulk, Sharla, Dunban, Melia, and Riki. I built it as a way of celebrating the series 10th anniversary and the release of Xenoblade Chronicles 3.
I believe it would make a great LEGO set as for LEGO fans it represents a 2-pack of mechs with unique designs that would be fun to build and display, and for Xenoblade fans it would be a way to get models of the Bionis and Mechonis, something which has never been merchandised before, and it includes all the characters from the first game one would want.