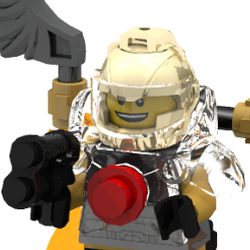 This is the typical Lego fighter jet that can be seen in Star Wars! It includes 4 easy-launch spring loaded cannons and five flick-missiles for a power-packed blaster punch! It has a cockpit that can fit one minifigure and four wings that can fold together to form two. It has one engine in the back and adjustable front wings. This set will also come with a landspeeder with Han Solo and Chewbacca riding! This includes four flick-missiles. Extra missiles are included and this set has 380 pieces.

Build Info: This set has 380 pieces and would be for ages 7-14. It includes two models, a blue landspeeder, and a red fighter spaceship. It would not be too hard a build, but would require focus and concentration.

This project has three minifigures, Han Solo, Chewbacca, and a spaceship pilot with a suit to match his spaceship.

Thank you for viewing this project and thanks for your support.