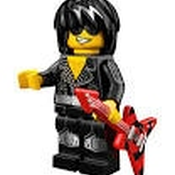 What was that?  It's The Speed Demon motorcycle!  This cool grey bike has the horsepower will make anyone want to take a spin in it. With four motors, ten cylindars, two pull-back motors, and four exhausts, Biker Bob is ready for action!  Will he be a world champion?  an uncatchable crook? or just a cool guy with an insane bike?  The choice is yours!!

I think this would make a great set because of its detail.  With not one but two pull- back motors it can go a far distance in a short amount of time.  Though you may notice two different shades of  the dark grey it would be the lighter of the two darker greys (if this would keep you from supporting please tell me).  Having multiple motors and exhausts shows how tough the bike is.  Also the bike won't break if it crashes, the suspension underneath is very stable.  It is small (in piece count) but that doesn't mean it isn't cool enough to be a set!

Please support, follow, comment, and share on social media.  Your support can make it possible for The Speed Demon to hit the roads and the shelves!!