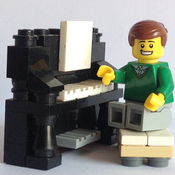 By NinjaChips19
45 comments
I wanted to build my favourite TV show 'Monk' in LEGO form, so here it is! This is a build of one of the most common locations, Mr. Monk's Living Room/Lounge, which doubles up as study.
The Build
This build is small, but quite close to scale. It's 15cm long, 13.5cm wide, and just about 8.5 high. One entire wall is easily removable for better access, along with the main window. Additionally, a small section of the back wall is removable. The rest of the room is filled with Mr. Monk's furniture, and a few details are included that only Monk fans will know about, like his small green Christmas gift from his wife Trudy, and the slightly skew coffee table. I built a small wall socket, for his reading lamp to plug into, as I thought it's a small, but fun detail that's rarely seen. A few of Monk's bookcases are included, which are both brimming with books, and his couch and armchair are all built so that there's somewhere to sit! This isn't the biggest design, but it comes in at roughly 1300 pieces.
I feel like this set would make a good LEGO set, as it's a nice, compact, but comfortable room. It would also pay homage to one of the best detective shows ever! I hope you like it as much as I do! As Mr. Monk might say: "You'll thank me later!" =)