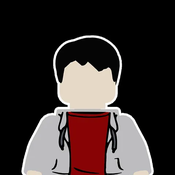 By InterBrick
66 comments
The newest addition to the NCS intergalactic fleet has just been revealed! Originally designated LL-734, the revolutionary new flagship was affectionately dubbed "Goose" by pilots and technicians alike for its distinctive geometry and powerful flight capabilities.
Designed by a team of top engineers over two weeks, the Goose was built for deep-space exploration and long-range operations. The most powerful thrust to mass ratio of any ship to date allows longer and faster flight than was previously possible. The Goose is also adequately prepared for planetary exploration, featuring auto-stabilising landing gear, and a cargo hold for space snacks.
I hope you like this build! The ship itself is composed of 2103 pieces and was a lot of fun to design. The hangar, vehicles and other elements were fun little additions and bring the total piece count up to around 10,120. Big thanks to Peter Reid and noblebun for inspiration.
If you recognise this from one of the 90th anniversary contests, you aren't mistaken. The Goose is now available for potential production as a set! The set would consist of the ship itself, combined with a couple of classic spacemen, a smaller ground vehicle, and potentially some robot helpers. To be clear - the hangar would push this project way over the 3000 piece limit, so it's not included in the proposal.
This would make a great set primarily for AFOLs, as it provides a fantastic display piece, owing to the high levels of greebling present on the model, as well as an interesting geometry. Additionally, the build experience is sure to delight, as the various building techniques utilised in combination with several interesting ship components will keep any builder engaged. With a little bit of frame strengthening, this could also be a potentially swooshable ship!
If you like this model, please consider supporting and sharing so we may have the chance to see this become a set. (This would make this model a lot more affordable, as the cheapest I could find all the parts was around 1500 AUD!) Thanks very much!
3D model
Higher-quality images