The Legend of Zelda - Ocarina of Time: Ganon Battle 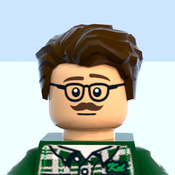 By Cromone
23 comments
The most iconic battle in the The Legend of Zelda series!

This set recreates the epic final battle of the video game Ocarina of Time, between the courageous Link and the evil monster Ganon on the remnants of his dark castle. Like in the video game, Zelda is on the other side of the wall of magical flames, which can be opened, helping Link in his fight, and the shattered pillars can be knocked down easily.
Ganon is bigger than in the video game, but it represents better the impressive feeling of formidability that emanated from this final boss when it was first released in 1998. All of Ganon's limbs, including his tail, neck and torso are moveable.
Ideally, the beige bricks that represent his clothes would have the Gerudo pattern printed on them, but that was the best I could do with the limits of LDD.
Hope you like it!