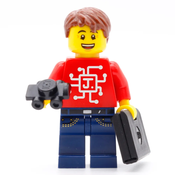 Hundreds of years in the future, a team of astronauts discovers a small moon orbiting a big ice planet. As they approach the surface, they discover wreckage of spaceships and large robots, some buried deep in the dust of the moon.
Now, two years after the initial findings, the astronauts have built a base on the moon and are discovering more and more traces of an earlier battle as they excavate.
Commander Chris Studstrong leads a team of scientists and engineers who have made it their goal to find out more about the earlier events on this moon.
While some of the astronauts are on the moon's surface excavating, others are back at the base examining the discovered artifacts.
Boris, Jenny and Lucas, as engineers, explore the wreckage and dismantle parts to be examined afterwards. Naomi, a chemist, researches the spacecraft's fuels and ensures that no dangerous reactions can occur while working on the wrecks. Ted, a scientist, and David, a geologist, study the lunar surface to find out more about the crashes and their causes. David's instruments have just made a very exciting find: a droid frozen in the ice under the dust!
Gina works at the base and researches the technology and materials of the excavated objects in her laboratory. Jule, an engineer, makes sure the station's life support system is working properly and also keeps the spacesuits in good shape. There's nothing she can't fix!
Bob, a reporter, accompanies the crew on their mission and documents all interesting objects and progress.
An overhead railway is used to transport excavated parts and connect the base to the surrounding area. Pilots Phillipe and Cara can also use a crane to retrieve heavy debris.
To better cover long distances on the moon, the moon buggy is used. In addition, the friendly robot S.O.L.A.R.I.S. helps the team with the work on the wrecks and warns his team of potential hazards with the help of his sensors.
From this point on, the story is up to you. What is the background of the wreckage? What else will the team discover?are there more witnesses of past times in this system, maybe even on the giant ice planet that the moon orbits? It's all in your imagination!
---
This set consists of 2718 parts, including 12 minifigures, a robot, a space buggy and a lot of utensils for the excavations!
By pulling or pushung the handle attached to the long part of the track, you can decide whether the railway should stay on the upper circle or go down. The track can easily be extended at the siding to explore new excavation sites.
---
If you like this idea, feel free to support and share, to increase the chance that this entry is becoming a real LEGO set one day. Thanks for every support! :)