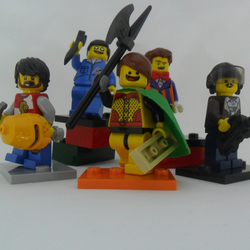 Captain Martin Morticulus was a great merchant. He sailed he seas trading and selling artifacts of many sorts. However, a curse befell the Captain. He became greedy and evil. While he still had some good in him, he retired. He and his crew found rocky islands on a journey westward, so that was where he went. He left his crew in Spain and brought first mate, Rodrigo Schmeegan. Meticulous and Rodrigo made their shack from the ship. When the two were polishing their riches, they came across an oil lamp. The Captain cleaned it with his shirt and out popped a Genie.

One day, Rodrigo spotted a Jollyboat but there was no ship in sight. He warned the Captain and when the boat came near they saw who it was. It was former crewmates. Quartermaster Verde and Gunner Guapo were their names, and they wanted the Captain's treasure.

I believe it would make a good Lego product because I have noticed a lack of lighthouses. This was a fun build because I had to create hidden items but make it seem as if nothing is there. The hidden skeleton is my favorite part of the set because it was the most challenging part to build. I hope this gets pretty far in the world of Lego Ideas.