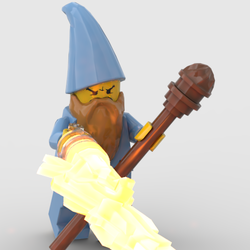 Thank you for looking at my LEGO design. Please consider supporting, it would be greatly appreciated.

I think this would make a great set – Let your imagination and your mini-figures run riot across this scenic Island. There’s plenty to do and see to enhance your play!

This started as a design for my son. Usually he plays with his LEGO mini-figures on the floor. This is not always ideal as the carpet is flexible and makes them fall over. I can see him getting frustrated at times… Obviously a simple base board could be used, but why stop there.

I was looking to build some smaller “set pieces” for him to use with his mini-figures. This quickly grew and grew and we ran out of bricks! Hence the switch to a digital build and the island you see in the pictures.

Each segment of the island is a unique scene in itself, based on a 24 x 24 board. The quirk is that each board can be used separately or joined together in many different ways.

The pictures show the full configuration of 9 boards, but this could be rearranged in itself. If you wanted a smaller scene you could simply lock the 4 corners together. Alternatively you could reshape the island to have, say, 6 boards and be a rectangular shape. Many different shapes are possible

I don’t know how many different combinations of boards there could be – perhaps someone could tell me in the comments?

I’ve tried to stick to a variety of basic scenes, so that many different LEGO themes could be used. For instance it wouldn’t look out of place to play with Pirates, Knights, Ninja or City. Even Space on an alien world or going back in time… In fact all the themes could be used at the same time!

To try and maximise the fun and playability I’ve included lots of detail on each board. I’ve also made the design choice to leave plenty of exposed studs to allow mini-figures to be place everywhere you want. Likewise I have left the roofs off the buildings, so that the internal space is accessible for play.

The complete list of scenes, based on the overhead picture, are:

Middle – Hill top building. Could be a house, fort, base, lodge, ninja temple. Pony and chickens wandering nearby. The building could be removed as one piece giving more space… maybe for large battles?

North – Jetty / boat launch. I was going for a gentle quiet location, hence the undisturbed river plants and the guitar left behind. Equally it could be a landing point for soldiers! I’ve not included anything to “age” the setting, so changing the boat could easily change the setting.

North East – Rocky cove, with wooden bridge. A place to go crabbing with your net. The baby dino could be a statue or a shrine or a focus point.

East – Sandy beach and Mangrove trees. Gentle slope into the sea. Relax on the beach or land your army…

South East – Lighthouse on the edge of the Island. Stronger waves hitting the coast. Every lighthouse has a cat right? Ornate path across the grass.

South – Farm or small holding, with well to gather water. Scarecrow keeping the birds away. Would work well with the accompanying house on the middle board. Or perhaps with the castle, a kind of serfs vs nobility situation? The well goes down deep into the board.

South West – Buried treasure on the beach, a classic pirate map setting! Follow the dots and X marks the spot. Incorporates hinged pieces that reveal the treasure chest beneath. Secondary Island includes camp fire with fish drying/cooking and seating for two. Access via a wooden plank. Did you spot the monkey in the tree? He knows who buried the treasure.

West – Grey castle on the stormy cliffs. Arguably my favourite board. I increased the height of the castle to loom large over your mini-figures walking from the woods. Tried to look visually imposing, especially with the long flight of steps. Includes an entrance to the underground mine near the gold. Could benefit from a flag or two. Plenty of room on the top of the tower to assemble your troops and defend from attackers (by land, air or sea).

North West – The dangerous board! Shark infested waters and an Octopus breaking through the surface of the water. On the coastline a skeleton has risen from his grave, and is chilling against his gravestone. An empty cauldron and frog could suggest Witches in the area…

This is one of my larger creations, but not too excessive on the number of parts = approximately 1,750. It could be as big as 72 x 72 studs, but of course can be separated into the smaller boards if space is at a premium.

I have used a simple linking system to join the boards together. A red pin joins two 1x2 technic bricks via their central hole (see the red pins on the model). These are on the middle edge of the boards, so they are interchangeable.

One pin per side gives an appropriate amount of grip to keep the boards together, but is also easily separated without excessive force.

I imagine a finished product would include various stickers for:

I’ve taken the choice to not include any mini-figures. I would rather keep it open for the owner to choose which to play with.