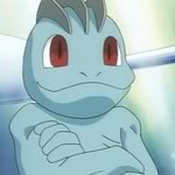 By Makuta_of_Oz
3 comments
The baterra were created by the Great Beings to try and stop the Core War on Spherus Magna by force. They were programmed to seek out and slaughter anyone wielding a weapon, but ignore anyone without a weapon. However, they failed their task. The Great Beings tried to shut them down, but without success. Instead, they had some of them assist the Matoran in the early stages of the creation of the Matoran Universe. In the 100,000 years after Spherus Magna broke apart, they remained active, slowly wiping out the Skrall until the Skrall migrated south.

The baterra are shapeshifters, and often disguise themselves as items of nature like trees and rocks when preparing to attack their targets. They rely entirely on ambush, and are undetectable by any methods on Bara Magna.

The baterra were planned to be released in 2010 before the decision to cancel the line. Prototypes were created before the decision was made, and were used in two comics, All Our Sins Remembered and Fall and Rise of the Skrall. If this gets enough support, then hopefully LEGO will complete the design process for the battera, and then release them as sets.

The baterra were the reason the Skrall migrated south to Roxtus from their home in the Black Spike Mountains.

After a foraging party was attacked out of nowhere by a foe that seemed to appear and disappear at will, Tuma organised an expedition to find and punish the attackers, who he later discovered had already destroyed all Skrall-run outposts, leaving no survivors.

A week into the expedition, Stronius is able to destroy a baterra in a trap, revealing that they are machines! The Skrall then follow two more baterra into a forest, but the forest was an army of baterra in disguise! Only just over 20 of the hundreds of Skrall on the expedition survive the retreat back to the fortress.

Soon, the baterra invade the Skrall fortress, forcing them to set it ablaze and migrate south to avoid extinction.

Credit goes to BIONICLESector01 for the images.