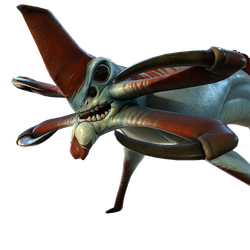 By crazygamer7477
16 comments
It is an aggressive creature from the Video Game, Subnautica. It is the only species in Subnautica that can be found on land other than the Skyray. I built it because I just love Subnautica so much and was looking for something less complex than say, this. So I thought it would be pretty hard, but it wasn't. The only downside was in LDD I could find a certain piece I was looking for so I just used something else. I believe this would make a great LEGO set because there are about 10,000,000 total Subnautica players according to Twinfinite. That means the amount of people that have played Subnautica is greater than the population of 17 Wyomings. That is a lot of people. And the fanbase for Subnautica will only get bigger because they are making a Sequel which is currently in Early Access, which is called Subnautica: Below Zero.