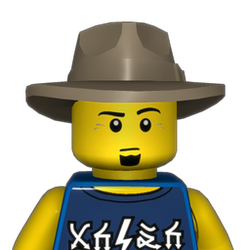 This is the second set of Triassic Planet.
The name "Stego Hunters" is due to the two minifigs that are one on the medium sized t-rex, Guy Stefford, and the other is John MacFin.
John is trying to hold back a pterodactyl, still wild, to be able to ride later.
Guy, instead, at the turn of Rexon (T-Rex) chases a lilac stegosaurus.
When John gets tired of running, he sits on his Minicar and chases the feathered dinosaur.
The seat that's on the back of Minicar is also positionable on Petelus (the pterodactyl).