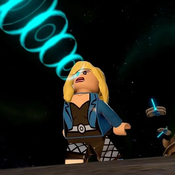 By Bricks2Models
41 comments
Two suites are available for rent at this bed and breakfast-inspired mini airport, and the set includes a private aircraft with ample space to land, on its dedicated brick-built helipad. The sports car has a parking space made from tiles similar to the helipad. The trophies and cash inside the car suggest the driver has either won prizes or the items were "taken" from the rightful owner. Near the parking space, two lockers with mock keypads suggest a safe place to store suitcases during brief visits.
The building's ground level has two benches, a beverage machine and information telephone booth. Just outside is a miniature coffee shop that can seat up to four customers.
The suites situated on the second and third floor each have kitchen appliances, a sofa, coffee table, storage unit, a bed with night table and radio. A wall-mounted TV set is also provided.
The modern aircraft is solely for civilian transport and the suites will provide travellers comfort during notable layovers.
The model was created to reflect the idea that this would be a fun place to visit in a real world experience, especially traveling on the futuristic helicopter.
The Private Aircraft Stopover is a worthwhile addition to setups, as details were maximized to ensure playabilty. The set is also displayable alongside other building types in a Lego City, while being useful to bridge any style differences between recent and vintage models.