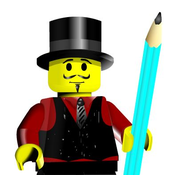 As an artist I'm always looking for new ways to create and it occured to me that I still had my childhood Lego's laying around so I set out to build something cool. The idea of building a mech has been with me for almost as long as I can remember, but as a child I couldn't really make it work (my first mech included Duplo, the colours didn't match and for some reason it had wheels for hands). This time however, I think it worked out rather nicely.

This object is inspired by the Blacktron II line (Blacktron Future Generation), which is evident from the use of black parts with white lines and transparent neon green accents. The reason I chose Blacktron was that I still had a bunch of parts from that time, and also Blacktron just looks really really cool.

Features include over 15 points of articulation (making it quite posable), room for two minifigs, interchangable/removable armour and hands, adjustable shoulder cannon, 'jet thrusters' on its legs and back, removable 'engine', and many other details. It's about 30 cm's high, weighs close to 350 grams and is made up of an estimated 1200 parts.

What you are looking at here is something like version 6.x and the build is actually a composit of two earlier (failed) builds: A short, bulky, tanklike mech and a tall, slender mech. Many elements from these two were integrated into one build resulting in a tall, but bulky mech with room for two operators. During the ten year on-and off building process there have been many challenges due to a chronic lack of money, parts and know-how, but I would say that most of these challenges have been overcome simply by keeping at it. Also I learned that Lego has changed considerably since my childhood, there were literally hundreds of new parts for me to discover and experiment with.

Thoughout building I've had to make many comprosmises between apperance, articulation and structual integrity. The biggest challenge was keeping it from falling apart, initially I couldn't even keep it standing on its own. However, through trial and error I've found ways to make it work, it still has some weaker points, but if you're not too rough with it this will stay together just fine. You can pick it up by the waist and even the arms without it falling to pieces, it's also well balanced when standing, so won't fall over easily.

What sets this apart from other mech builds I've seen so far is the fact that it's built using mostly bricks and plates, making for strong connections and a solid old-school look. I tried to keep the build as authentic as possible, so no CCBS joints and plates, no custom parts and as little Technic as possible. Looking at it I think it could fit well in the Blacktron II universe as a walking (and flying) tank with the minifig below as the commander/driver, and the one on top as the gunner.

Eventhough a project like this is never truly finished and I could spend many more hours perfecting the design and adding new elements, I've reached a point where it's 99.9% done and I just have to stop fiddling with it so I can finally move on to other projects. I just really wanted to share it with everybody and I hope you all like it and will vote for this build so that it may become an official set one day. Thanks.