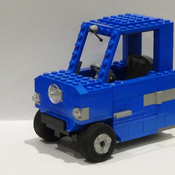 The Piaggio Ape (pronounced Apay) has become one of Italy's most iconic vehicles, designed after the Second World War as a compact commercial vehicle to help rebuild the lives of small business owners, the Ape was an affordable multi-purpose tool for the job. Using Piaggio's most famous scooter as a basis, the Vespa, the company continues to build these wonderful little trucks, celebrating their 70th birthday in 2018. With millions of possible body styles and adaptions, it was impossible to do the Ape justice with just one model, so why not make two and allow this set to show the sheer versitilty of the Ape.

The Yellow florist's Ape is based on the TM model, a larger capacity Ape with a steering wheel and two seats. The engine is a single cylinder two-stroke 218cc (or a 422cc diesel), reaching a top speed of 40mph (64kph). dispite it's size and only having 3 wheels, this little van has an impressive payload of up to 1550lbs! (700kg) This Lego version has much more potential than a florist's van, it's design incorporates a ladder chassis and a flatbed base so anything could possibly be mounted on it such as a catering facility, mobile bar or even a miniture campervan. the design incorporates a realistic rear engine (exposed cylinder and air intake), opening doors and space for two minifigures inside!

The second Piaggio in this set is the smallest Ape on sale today, the 50. The name is derived from it's tiny two-stroke 49cc engine. This means the Ape 50 can be driven from the age of 16 in the UK on a provisional license, the only downside is that the top speed depends entirely on what gradient you are on and how strong the wind is, 25mph (40kph) is usually top end. Having said this, the Ape 50 can still push along with a payload of  450lbs (205kg). Unlike the Ape TM the Ape 50 is controlled by a handlebar system, very similar to its two-wheeled cousin the Vespa, with a 4 speed collumn change, seperate front and rear brake operation and motorcycle twist throttle. Here, the Lego version is in ice-cream van livery with ice-cream dispenser and ice lolly fridge to the right. Similar to the TM model in this set, the versitle design based on the same layout as the real Ape 50 means there are endless possiblities for this concept too. In addition, this model also utilises a realistic chassis rear engine design with exposed cylinder head, opening doors and the famous handlebars!

Not only are these Ape's designed underneath to replicate the real thing, these models are strikingly acurate reproductions of the Ape in minifigure size, offering multiple possiblities to incorporate different uses other than those proposed by this set. To honor 70 years of constant production, this "Piaggio Duo" serves as the perfect way to recognise those years, to recognise it's ingenious design from day 1 and to recognise a true workhorse whose versitility knows no bounds.