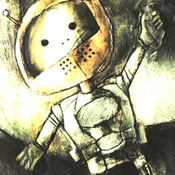 By erthandfiya
2 comments
A new concept play theme, ICE VIKING's, new cool fig's and they have very modern transporter's. The Theme is original and no its not a game or movie! It will feature other sets were you'll be introduced to alien like dragons and it has plenty of action packed in on the cold icy planet of Galma.
This set (Spikier) has two very cool play features. Shoots 'ice discs from the rear' and it converts into a second 3 wheeler by flipping it over. ::::::: So go and vote for creativity! :::::::::