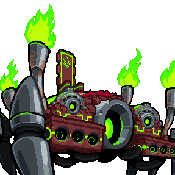 "Alright! Split up, and take it to 'em!"
Introducing the small-scale ships found in the classic Nintendo game StarFox 64. With the recent collaboration between LEGO and Nintendo, any IP is now a possible product, and the ships from StarFox 64 would make a great addition to shelves everywhere!

StarFox 64 is one of my favorite Nintendo games and one of my most played N64 games. In this on-rails flight simulator, Fox McCloud and the rest of the Star Fox team must travel the Lylat System in order to stop the evil Emperor Andross.

Of course, not every ship from this beloved game would fit in one IDEA, so I've selected six that are prominent, recognizable and fun-looking. You might be thinking, why so small? Why not make them the epic sizes of some other LEGO star-ships? I have three primary reasons for this. The first is that, despite their impressive details, large ships cannot be handled easily by children and, if broken, take longer to rebuild. The second is that large ships usually have mini-figs, and mini-figs of anthropomorphic animals are beyond the scope of my abilities. Lastly, smaller sets are more affordable. I think everyone should be able to afford LEGO, and smaller sized ships are a great cost to quality ratio.

The first ship on display is the Arwing, elite star-ship and All-Range fighter. The white and blue Arwing is constructed from 49 parts and carries its signature details found on its N64 counterpart.
"Can't let you do that, Star Fox!" - Wolf O'Donnell
The other ship is the scarier (and much cooler) Wolfen. Used exclusively by the enemy team Star Wolf, led by Wolf O'Donnell. The Star Wolf team and their Wolfens are "bosses" encountered on three levels in StarFox 64. The Wolfen is constructed from 59 parts and is based on the in-game model for the Wolfen.
"Enemy group behind us! Man, they're fast!" - Falco Lombardi
In the second set of images, the bulky orange ship is the Invader II Fighter. Although there are a plethora of basic enemies available, I felt that the Invader II fighter sports the most interesting design of any enemy ship. The Invader II is constructed from 76 pieces.

The pronged pink vessel is the Cat's Paw, a stolen enemy ship repainted for use by Katt Monroe. Katt will drop in to help on some levels depending on your path. I really enjoyed designing this one. The Cat's Paw is constructed from 59 pieces, and the bottom flaps are easily removable to allow to rest on the ground.
"Sorry to jet, but I'm in a hurry!" - Fox McCloud

Featured in the last photo is the Arwing in its configuration for space flight. In order to maintain high speeds, the Arwing retracts its wings and orients them in a streamlined manner. This configuration is made from 51 parts and is designed to resemble the player model used in space flight levels.

"Let's see how you handle our new ships!" - Pigma Dengar

The final ship is a strange beast called the Wolfen II, a secret boss encountered at the end of the in-game Hard path. As its name suggests, this is an upgraded Wolfen flown by Star Wolf after you defeat their previous ships. Although it sports an... unusual colour palette, I can assure you that matches the models you'll see in game. The Wolfen II is made from 97 parts and features moving wings.
If you've made it this far, thank you for reading my IDEA. Please support and share, it's free! If you have any more suggestions for Star Fox Microfighters, comment below!