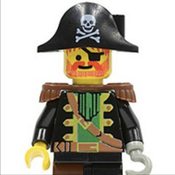 By Captain Key
15 comments
There is only one way to hunt for treasure in the land of Legonia ~ through time! Colonel Seiko and his brave crew set out with a most modern time traveling airship of the 19th century and explore lands past and present for treasures and artifacts that will make them rich!
I created this build because I would love to see LEGO sets include more steam punk themed products and include a sense of adventure only dreamed about by late 19th/early 20th century authors. A sense of wonder and excitement awaits as the crew sails through the air with their unique time machine with mechanical wings!
A relatively small set, but including some interesting parts and build tactics. Most of all, the story is easy to make up as it's build into its' own existence. I foresee an easily expandable theme and it's easy to move toys away from violence and respire our childhood sense of wonder for a time when the world still felt new. It includes Colonel Seiko himself, pilot and periscope operator. Nice engine details/gauges, anchor/winch, propeller, hot air balloon, engine clock,  and a boat bottom for water landings.