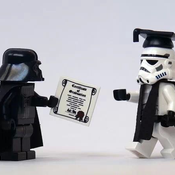 By Agusti Padrós
23 comments
Come in! Welcome to Erling Records, the most famous record store in town!
This model is a homage to record stores. There is something magical about walking into one of these spaces: people crate-digging, records on display, posters everywhere, not even an inch of space not filled up... There is a whole culture and iconography associated with record stores that is particularly fascinating and which deserves portraiture as Lego set.
Knowing this is a Lego record store, I packed all the typical elements but with a Lego twist. The figures are miniland scale, the posters resemble real covers but with minifigures and bricks instead and the names have Lego puns. Look at all the fun references in the proposed sticker sheet below!
It was really fun to pull off the structure of the build: it's almost as if it were two sets in one. Although the interior scene is the main one, the cool angles and exterior detail make this a fully posable 360º model.
Stats:
This entry was originally designed for the "Music to Our Ears" contest, but did not get through the first phase. I believe this model still has potential to become an official Lego set, so that's why I'm uploading it as a product idea.