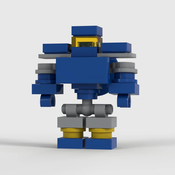 THE ZENITH
‘Leaving the Mount Olympus Shipyards in T Minus 10…9…8’
The Zenith is exploring the stars, in search of new lifeforms and planets. With its 2 human pilots, and their trusty robotic companion, RYAN, the Zenith crew are traversing asteroids, planets, black holes, and the stars themselves. With the ability to split into two separate ships, The Star Chaser and The Constellation, the Zenith crew are the truest of explorers.
Concept
Lego is one of the constants of my life. I have been playing/building/tinkering with it for over 20 years, at this point. For me, the best sets are the ones that give you the tools to create your own stories, ideas, and to imagine things. The initial concept of this Idea was actually the Exo Suit, released in 2014. I wondered ‘what would other vehicles in that universe be like?’, so I decided to build something that would exist in that universe.
The model is designed to separate into two ships, and has 2 minifigures, and a robot. Rather than make these figures the same as the ones in the Exo suit set, these figures have a different shade of green, to represent being a part of a different division of whatever organisation they are part of. RYAN the robot was designed with the classic space colours and was fun to design.
If this project was approved, then not only do we get an awesome spaceship, but also the first LEGO Ideas set inspired by an earlier ideas set. Please consider supporting this model, and together, we can reach the stars.