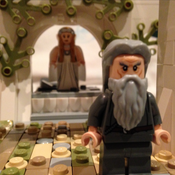 Welcome to Tornado Alley! America's infamous tornado belt where climatologists and weather chasers go in search of the perfect storm. From Oklahoma to South Dakota they risk their lives in the name of science!

Tornado Alley allows LEGO fans to play at the centre of the disaster zone where winds can reach up to 70 mph! In the midst of the chaos play as the brave scientist duo who are determined to get as close to the tornado as possible. Play as the tornado-prepared family as they run for cover to the safety of their underground bunker. Play as the tornado itself as it creates a path of destruction. The highlight of this set is the pull-a-part house which uses friction, and not studs, to stay in place making it easy to pull apart and easy to put back together. There's never been a LEGO set where a house can rip in half like this! A simple sliding manoeuvre allows LEGO fans to recreate the very moments of destruction. A pull of a Technic axel makes the pivoting front porch fall over. Don't make a mess pulling LEGO pieces apart to recreate a disaster zone! Create controlled chaos with two easy steps and when you're done playing simply slide them back into place. No work needed!

Although representing a tornado with LEGO pieces isn't easy, this set utilises Technic beams and connectors to create a helix-like spiral that can be spun manually. The Technic beams are attached to an enormous 32M cross axel which makes the tornado tower menacingly over the landscape. This set has five minifigures including two storm chasers and a family taking cover in their basement. The storm chasers ride in their red weather truck, gathering data, while the family keeps warm in their bunker. Did someone remember to lock up the chickens?