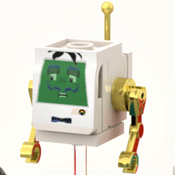 By jiminycrickets
8 comments
Alphanumeric!
Based on the groundbreaking animated television show ReBoot, this set aims to bring back classic ReBoot to fans in an all new format!
The evil virus Megabyte and his chaotic sister, Hexadecimal, have caused some serious down-time in Mainframe! Megabyte's bumbling henchmen, Hack and Slash, have captured several binomes to try and access their P.I.D.s (Personal Identifications) and turn them viral. It's up to our Guardian, Bob, and his new found friends; Dot and Enzo Matrix, Mouse, AndrAIa, and Enzo's canine-pal Frisket, to rescue the binomes and put those viruses in file-lock!
This set includes Minifigures for Bob (with Glitch), Dot (with personal organizer), Mouse (with katana),  Enzo (with alternate torso), AndrAIa (with throwing star), Megabyte (with claws) and Hexadecimal (with energy blasts). Buildable figures include Frisket, Scuzzy, Hack and Slash, as well as the binomes Old Man Pearson, Dot's Secretary, Rollerblader, Herr Doktor, and Lt. Chauncy.
Frisket is one big dog! He can help out our heroes by giving Lt.Chauncy and Herr Doktor a good kick in the bitmap! Each viral binome can be attached to Frisket's mouth via a 1-stud connection.
Hack and Slash may be low density, but they make up for it with brute force! Hack and Slash feature removable jetpacks and can be spun at the waist to knock down minifigures and binomes!
This set also includes two large interactive elements:
Bob's V262 Turbo Drophead Car - Fits Bob, Dot and Enzo. Use Bob's Glitch accessory to activate a hidden disc launcher!  Comes with 4 'delete-discs'. A storage space in the trunk can store the delete disks and Enzo's alternate torso!
Binome P.I.D. Extraction Chamber - This platform stores all five binomes. Herr Doktor is distracted with his solitaire game while Lt. Chauncy keeps watch. Swoop in with Bob's car to knock down the archway and free the binomes!


ReBoot was the first fully computer animated half-hour television show! It was created by Gavin Blair, Ian Pearson, Phil Mitchell, and John Grace, with design work by Brendan McCarthy!
It's impact and influence on animation lives on to this day, and it is my goal to celebrate ReBoot's legacy by bringing it back to fans new and old!