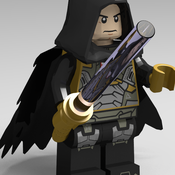 The Vorpent Sting was commissioned by Gammron galactic fleet in the year 2468. They commissioned the ship because the needed a fast-maneuverable ship that can also take a great deal of damage. This one is in Gold and black color scheme which represents the attack addition of the Vorpent Sting.

Fear, and fight factor: moderate, usually attacks in groups but still accomplishes missions on its own.