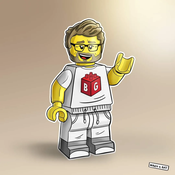 By TheBrickGeekz
80 comments
Garfield is one of my favorite cartoons and was originally a comic strip created by Jim Davies in the 1970s. Garfield was first published locally in 1976 as Jon and then Nationwide (U.S.) as the renamed Garfield in 1978. By the 1980s Garfield, Jon and Odie (the dog) took the world by storm and is now synonymous with most AFOL's childhoods. This cartoon has spanned for over 40 years. After standing the test of time, Garfield still appears in a cartoon strip and a CGI animation show.
I adore the orange lazy lasagna loving cat and his antics, he still brings a warm smile to my face.
Being a lifelong fan of Garfield, it inspired me to make a LEGO version of 711 Maple Street, Munice, Indiana, U.S.A. The Arbuckle residence. This model is based on the CGI animation version of The Arbuckle residence. I decided on recreating this version as it has 2 floors and is an extension of the one that appeared in the late 1980s cartoon - Garfield and friends.
As we all know, Garfield is iconic and after looking at many LEGO ideas entries there is very few of Garfield, Jon Arbuckle and the Arbuckle residence, something I felt there needed to be a faithful recreation of. I think like many AFOLS, an Arbuckle residence is something we would be excited to see. Along with, Garfield, Jon, Odie, (Pookie, Arlene and Nermal - pics to come)
Including Jon Arbuckle, Garfield and Odie (Pookie, Arlene and Nermal - pics to come)  the set was built and rendered in Stud.io which consists of 1376 pieces with an open back for easy viewing of the interior and of course a LEGO build of Garfield's favorite food... Lasagna.
I hope you like this build.
Thank you
The.BrickGeek