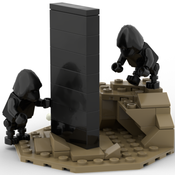 This LEGO Ideas set proposal is based on Stanley Kubrick’s 1968 classic, 2001: A Space Odyssey. Widely regarded as one of the greatest and most influential films ever made, 2001: A Space Odyssey’s impact can still be felt across cinema and pop culture today. More than 50 years after its release, it is still considered one of, if not, the greatest sci-fi movie ever made, being noted in particular for its scientifically accurate depiction of spaceflight, groundbreaking special effects, and breathtaking imagery. Not only that, but the film translates quite well into LEGO form, with its iconic ship designs and scenes. Such a monumental and groundbreaking film is one that I believe truly deserves to be memorialized in LEGO form. As a result, I want to give 2001: A Space Odyssey the justice it deserves with this LEGO Ideas project.

Please support and share this model if you would like to see it get the chance of being made into an official LEGO set. Thank you for your support and consideration.