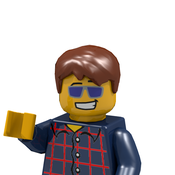 About :
Cair Paravel is first mentioned in the book The Lion, the Witch and the Wardrobe. It already exists at that time.  The prophecy states that eventually "Two Sons of Adam and two Daughters of Eve" would be enthroned at Cair Paravel. When the four Pevensie children (Peter, Susan, Edmund, Lucy) become Kings and Queens of the country after the defeat of the White Witch, Cair Paravel becomes the seat of the court of the Pevensie children and the capital of Narnia.

The following places are described in or surrounding Cair Paravel

◾The Great Hall
◾A well located south of the Great Hall
◾An apple orchard located outside the North Gate, planted during the Golden Age. It eventually grew right up to the wall.
◾A courtyard
◾A Treasure Room

The Chronicles of Narnia is one of my favorite books, and I have often thought that is have been over looked by The Lego Group, so I decided to make a notable land mark from the book in to a set. And so Lego Cair Paravel was born! The set contains 261 pieces, and I think it could come with a notable figure form the book.

Thanks for your support, and if you have any tips or recommendations, please post a comment. I’d rather have your healthy criticism than have this project make it to the Review and get rejected.

Thanks again, and if you like this project, see my others at