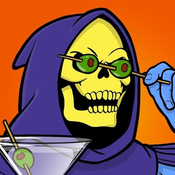 By DaddyO
34 comments
I present Rick's Café Americaín, the iconic nightclub from Casablanca, arguably the best movie ever made.
Nearly all the events of this classic film take place in Rick's and can be recreated with this build. I think it would make a great set for display or play, or both.
I built the cafe in monochrome to honor the original movie. To build it at Minifigure scale, I had to condense the huge sets built for the film, but I have included the main room and bar, gambling room, Rick's office and his apartment. Not sticking totally to black and white, I've added a wine cellar which alludes to Rick's colorful past. I also placed a couple of statues from Humphrey Bogart's film career into the cellar. The roof and upper floors are removable, and two of the walls swing out to allow greater access to the interior.
The set would include Minifigures of Rick Blaine, Ilsa Lund, Sam and his band, Victor Lazlo, Prefect of Police Louis Renault, Major Strasser, and more.
If you like classic movies, you have got to love Casablanca.