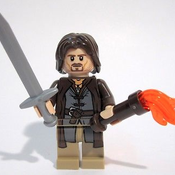 I decided to build this ship after seeing a bunch of other LotR builds by other people as well as lots of other pirate ships and such. I realize that the orcs in the LotR books do not have ships, but i still think it's a cool idea and would greatly appreciate your support!

The Ship contains three midsections and has a total length of approximately 83 studs or about 71 cm. With oars extended, it is approximately 26 studs wide or about 20 cm. In total, I believe it contains somewhere around 1,600 pieces. The ship contains twin anchors at the bow, connected to a winch to pull them in. The ship contains a complete lower deck, fully accessibly and with seats for 12 people to row (6 per side). The lower deck also contains a weapons rack and a drum. The main deck holds two large crossbows, as well as a small rowboat stored between the two main masts. Towards the stern of the ship is the captain's cabin (furnished with a weapons rack, a table, drinks, several barrels, and a small statue). Above the cabin is third, smaller mast, and a large lantern hanging from the back. The deck and cabin are removable by section to give access to give access to the interior. The ship has a total of 18 minifigures - 6 crew and 12 prisoners to row the ship - although if this were to become a set, It would probably not have that many minifigs. Please check out the pics, thank you for reading, and please support!