The Little Village (Asterix the Gaul) 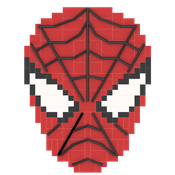 "The year is 50 BC. Gaul is entirely occupied by the Romans. Well, not entirely ... One small village still holds out against the invaders!"
Quote by,
Rene Goscinny & Albert Uderzo.
This Lego model recreates the Little Village of the Indomitable Gauls from the beloved comic book series written by Rene Goscinny and Albert Uderzo. The story is that of an ancient Gaulish (French) tribe (aided by a Magic potion brewed by the Druid Getafix which gives invincible strength), and their ongoing struggle against the occupying Roman forces. Built in micro scale and featuring all of the most iconic village buildings from the series, this would be the perfect display/play piece for every avid Asterix fan!
This Little Village boasts fantastic role play capabilities! Hold a village council meeting in the Chief's house, cook a delicious meal at Asterix's home, battle the Roman legions, hold a great banquet after the success of yet another adventure and so much more! Each and every house has unique details designed to accurately reflect the books.
Let's take a tour of the village!
As we enter the door of Asterix's home we will see Roman officer helmets hung on the walls as trophies and a stack of newly acquired, standard legionary helmets collected on their last visit to the forest. There is a special souvenir from their visit to Egypt on a small stand. Many a delicious boar has been eaten at the dining room table. There is a cauldron to cook up an occasional pot of French onion soup and a fireplace to keep warm and make their meals. Taking the ladder up to the loft we will find two twin beds for Asterix and Obelix, when he and Dogmatix come to spend the night!
As we approach the Great Chief Vitalstatistix's home we will see two shields and a large bulls head mounted over the door. Once inside we find the village council meeting area which comprises the front half of the house and the Chief's throne set atop the shield of Vercingetorix. (Vercingetorix was the last chief of Gaul, whom Julius Caesar defeated at the battle of Alesia, this famous battle is in the history books, be sure to check it out!) Behind the blue partition curtain is the dining room and kitchen where Impedimenta does her splendid cooking! Soup is in the fireplace, and will soon be ready! If we ascend the ladder to the loft, we will find the chief's bedroom!
Next, we will visit the blacksmith Fulliautomatix's house. Directly beneath his large red sign is his anvil. Stepping inside we see his forge, on the left hang racks of weapons which he has made. Further inside are his dining table and counter for food preparation. His bedroom is around the corner at the back.
And yes, you probably smelt it coming, welcome to the home of Unhygienix the fishmonger! Beneath his long blue sign is a table for displaying his fish which he sells to the other villagers. Just inside is a large stock of fish. And continuing even further into is home we find his fireplace, with his bedroom on the left and dining room on the right!
This time you heard it coming, we are visiting the Bard Cacophonix's house! Set atop an oak tree, we have to ascend the spiral staircase to reach his lofty home. Once we have reached the top, we get a beautiful view of the whole village! Then as we turn to enter his house, we will first see his small fireplace and his bed. Being a Bard, it is not surprising that we see a large trumpet hung on his wall and a Lyre laying on his bed!
Next, we come to the round house, home to yet another respectable villager, inside is a fireplace, cauldron, bed, chairs and a veggie patch around back.
Lastly, we come to the Banquet table, around which our friends celebrate their victories over the Romans, return of their heroes, and the end of yet another adventure!
But there are definitely more adventures to come and their story is far from over! Join their newest adventure by supporting and sharing this Lego model to help make The Little Village a reality!
Please be sure to check out my other project: Dynamic Adventure Sports Display Bundle!