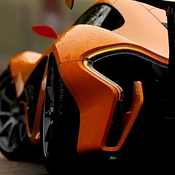 It was while watching "Jurassic World" that the idea came to me:

"They were very good scientists, king of physics, they had to find a way to build a totally independent machine, tell a real beast. After ten long years their project was finished. Depending on the appearance of their machine, they gave it the fabulous name "Electrical Dino". "

But is the  electrical dino really safe?

Its autonomy will not make it dangerous?

Will it not threaten the survival of other animal species like, for example, its model: the famous T-rex ??

In any case, it is made for a futuristic world: tanks, spaceships, epic missions, robot history ...