By Xendor
1 comment
After the Toa and Glatorian established a more or less peaceful civilization, they began participating in sports in order to keep up on their skills. Duels in Blank Arenas, arena battles with staffs and rods, arose in order to keep up their fighting skills, while Toa Kolhii was formed to practice team work.

Originally, Kolhii was a hockey-like sport played by the Matorans in the Universe of Mata Nui. In it, three teams of two, each team representing a tribe (i.e. Fire, Water, Earth, Stone, Air), would go out and try to make a score in a goal belonging to one of the opposing teams. Each player is allowed one Kolhii stick, while only the goalies may carry shields. The teams must agree over the number of goals to win, and the first team to reach the score wins.

The difference with Toa Kolhii is that there are two teams of two, and their is a limit of fifty goals to win. They can also use their powers as long as they don't attack or cause major harm, otherwise they'll be disqualified. Minor injuries from accidental contact is punished by a loss of ten points. Also, instead of representing tribes, each team is self supported. 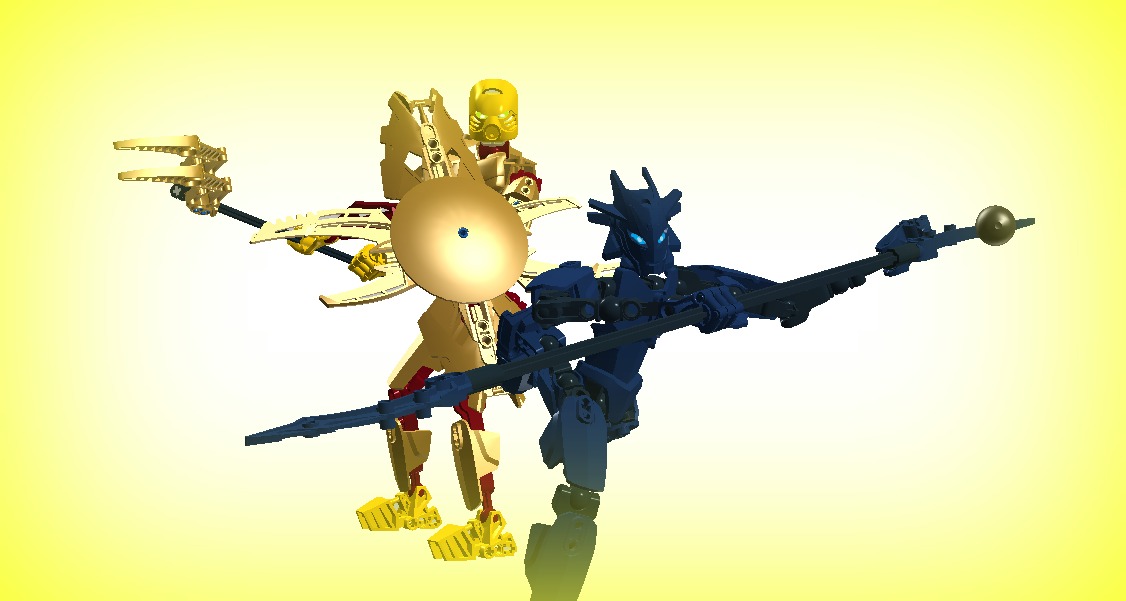 He wears the Golden Chest Plate, which was worn by Toa Tahu when he defeated the Rahkshi. As a result, his armor and weapons are all golden, except his mask, the Kanohi Hau. Each of his team has a piece of the Golden Armor, and as a result they each have their own Hau.

Right: Glatorian Hertix is a veteran Glatorian. However, after the war against the Skrall, he left his gladiator ways and began searching the desert for small Agori civilizations, as well as clues as to the Iron tribes demise. After finding a small camp of Iron Agori three thousand years after Teridax's defeat that hadn't been affected by the Dreaming Plague, a plague that infected them years ago that made them practically extinct, he returned home with them and joined Team Yellow to hone his skills. His weapon is also blessed by the power of the Ignika, so he has the power of water. 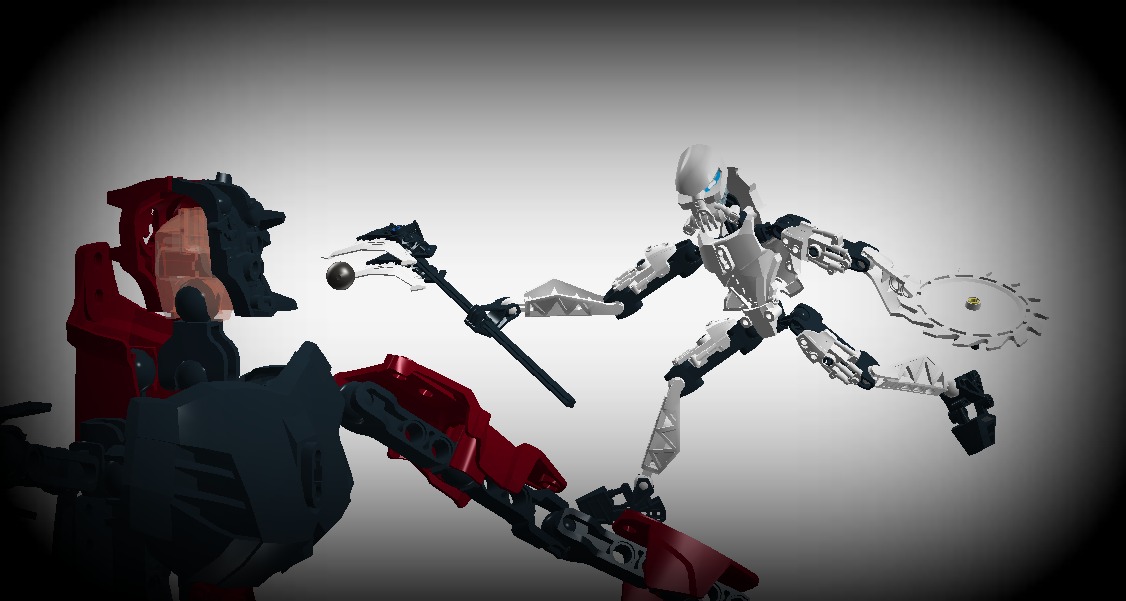 Left: Glatorian Takeron is the leader of the Kolhii team known as Team Black. Originally a Skrall, he was given a new form when he was caught directly under Mata Nui's life energy when Mata Nui released it onto the world. This gave him a new personality, and he began fighting to protect instead of conquering. However, the only person he's told his history to is Toa Clossar. To everyone else, he's a mystery. His weapon blessed by Mata Nui's life energy, he can control the plants all over the planet.

Right: Toa Clossar is Team Black's goalie. Skilled with every known martial arts from the Matoran Universe, he is one of the New Guardians, and uses his skills to send the Kolhii ball across the field and into the goal. Close friend to Takeron, he's been trying to get Takeron a date, and jokingly say, "Take her on." 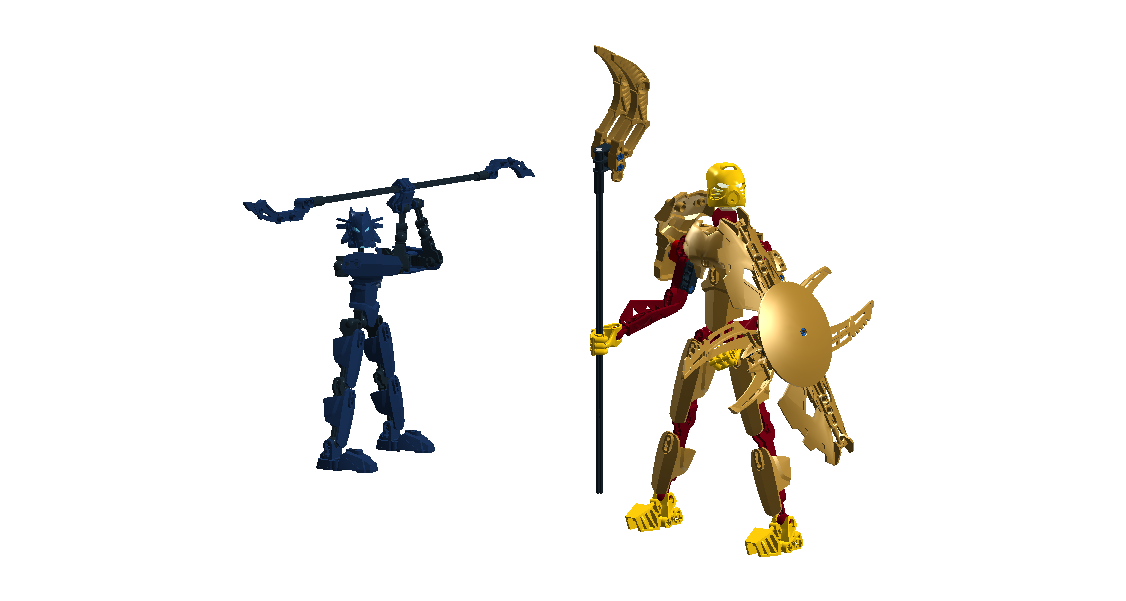 Here is another image of Team Yellow. 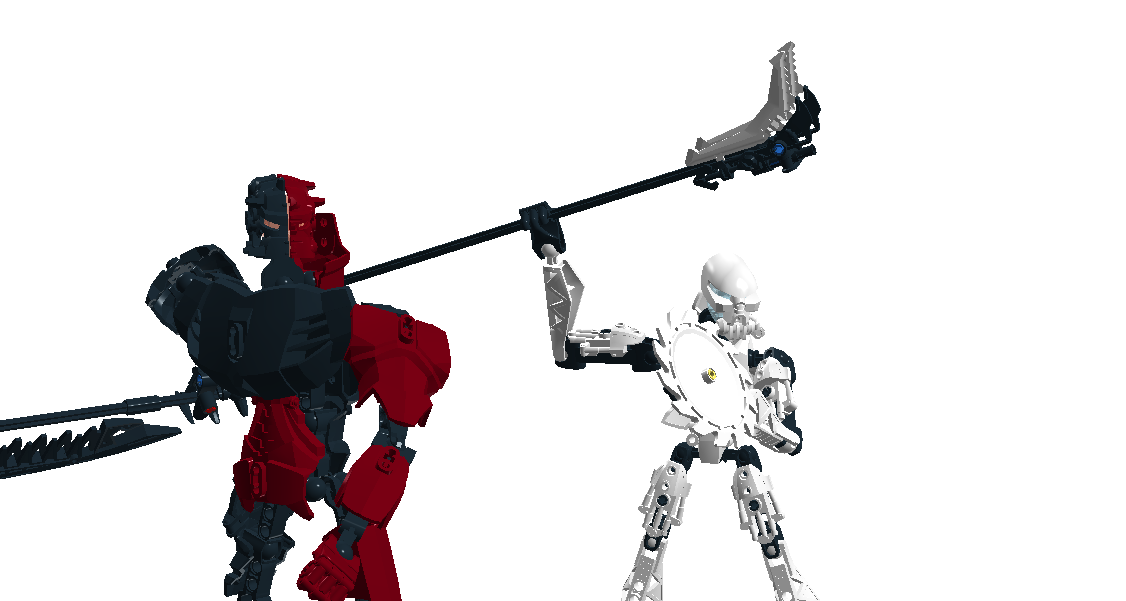 Here's another image of Team Black.

I hope you enjoy this set. Tell me in the comments if you want me to turn this into an actual game, like the Glatorian of 2009.

Here's all of the sets with each chapter.

Bionicle: The Return - The Unknown for Chapter 1.

Bionicle: The Return - The Great Being Angonce for Chapter 5.

Bionicle: The Return - Branar for Chapter 7.

Bionicle: The Return - Teridax for Chapter 8.

It has been days since Gali and her team of Toa and Glatorian went after the Mask of Life, and the people were beginning to worry. Defenses were being placed all over, and the Matoran and Agori were busy preparing an Under City in case they needed to go into shelter.

Vakama wasn’t busy. Instead, he was sitting in front of the altar, wondering what is going to happen next. Suddenly, a clicking sound was heard from the right, next to Mata Nui’s sword. When Vakama looked, he saw a Vohtarak, a red Visorak.

The Visorak responded by a series of clicking sounds, speaking in the Visorak language. Visorak can easily understand the Language of the Alliance, as it has become known as, but they cannot speak it. Same vice versa, yet even so Vakama has taken the time to learn their language since he met his unusual friend.

Vakama: Yes. And worried. I’m afraid that the Ignika has been stolen.

Vakama: The West. A team of Toa and Glatorian have already gone, but it will be a while till they get back.

Vakama stared at Vohtarak with curiosity.

Vohtarak: You it was as Toa Metru, freed us from Makuta. We owe our lives. You need, we help.

Vakama: What makes you think the others would go along with this?

Vohtarak: We protecting village from dangerous Rahi since creation.

Keelerak: You sure about this, Vohtarak? Soon as Toa, or anyone, walk in they think we attacking Vakama.

Boggarak: Dangerous, both friend and foe.

Vohtarak: This meeting succeed, friends dangerous no longer. Vakama speak for us.

Vakama: You want me to speak with the council?

Vakama: They will not take this lightly.

Vohtarak: Meet me at gate with guards. Take me to council. Translate, please.

Vakama: I will speak to the council about this proposal. I will let you know their say tomorrow.

The Visorak then left, running out the door, and to the back. Eventually, a Toa of Water called Helryx came up.

Helryx: I thought I saw something climb in like a spider.

Vakama: Indeed. But no need to worry. I’ll talk about it at the council.

As soon as Vakama came to the council hall, he asked Nokama to contact the council members that could be reached. Using the Windows of Sight, or TVs in our world, Nokama contacted the council outside of the city.

The connection was then cut, and Takanuva began to collect his gear when he heard a knock on the door. He then opened it… and looked straight into the eyes of Ignika.

Takanuva then pulled out his sword.

Takanuva: So you’re the theif!

Ignika: How can you steel oneself? Isn’t that called running away?

Ignika: Yes. Now can you point that thing away? I don’t have the time to make another body.

They clapped each other on the back with one big hug.

Takanuva: Now why is it we’re behaving like two close, long lost friends?

Ignika: Because we’re alike in more than one way.

Takanuva then walked over to the sink and pulled out two cups made from the wood of a Thornax tree.

Ignika: I’ve come to ask you something.

Takanuva handed him a cup.

Takanuva: And what may that be?

Ignika took a sip of water.

Ignika: How long have you known that Teridax is alive?

Akingi: Ignika is getting stronger and closer to discovering us. How are the Rahkshi coming?

Teridax: We’ve got a whole army. Already half of them have been restored, including many of the Golden Rahkshi that I sent onto Bara Magna.

Akingi: The fall of the Titans. My how that rolls off the tongue.

Teridax: It was the fall of A Titan. Mata Nui survived.

Akingi: And fell, sacrificing himself to give life and hope to the planet.

Unknown walked in to the chamber that they were in.

Unknown: What is this place?

Teridax points to this giant sphere suspended in the air.

Teridax: There is the brain of the universe.

Akingi: It needed to be, in order to control this monstrous creation.

Unknown: How could you control it?

Teridax: The mind and brain are two things. The mind contains the knowledge, training and memories of the person. Meanwhile, the brain contains the controls. Whatever brain I possessed, my mind could control it, because my mind remained the same. Yes, I needed to adjust myself to each body I possessed, but I got used to it.

Teridax: Unknown to the Toa and my fellow Makuta, I trained with the ability of changing bodies for years, using Rahi as test subjects. Ground Rahi, flying Rahi, water Rahi, any Rahi I would practice with. Later, many Matoran fell into an… accident. They would… lose control of their vehicles, and drive straight into whatever I desired.

Unknown: Indeed. Then you got much practice.

Teridax: Yes. And soon, I used my skills to attempt to poses my leader’s body. But he was stronger than I. Yet still, a part of me did get in. A part of me that was my goal, my will, my purpose only: to conquer the universe, and rule the Matoran. Of course, that small part of me became his as well, and he began to organize a rebellion against Mata Nui. But I soon took over.

A Voyeyahk, a Rahkshi of voices, then walked in.

Voyeyahk (projecting voices all over the cavern): It is confirmed that all the Vahki have been reactivated. Now our progress to recover the Rahkshi is at full capacity.

Teridax: Send the revived Rahkshi to that little town you wiped out. I need to get working on building up my kingdom.

Teridax: Easy. I have no intention of ruling them. They will be destroyed. But my sons and I will rule this world. And we will begin our search for the Great Beings.

Takanuva: You mean the dreams?

Takanuva: For a few months now. Nokama said she would look into them. How’d you know about it?

Ignika: Nokama discussed it with Vakama at the Temple.

Ignika: You thought so when you defeated him on the island Mata Nui. And the Barraki thought so when they destroyed the Maxilos that he was possessing. How can you be sure he isn’t dead now?

Takanuva sat there, his cup near the spilling point.

Takanuva: Recently, the dreams have become more vivid. He isn’t wearing the Mask of Shadows.

Ignika: I know. I have not sensed this mask before, but it is indeed evident that it is as powerful as me. Do you remember what it looks like?

Takanuva: No. I see it in my dreams, but when I wake up I forget what it looks like completely.

Male: It’s in the shape of a skull.

Takanuva: The Shadowed One.

Next chapter is Chapter 11: The Golden Armor, in Bionicle: The Return - Great Being Prime Galtok.