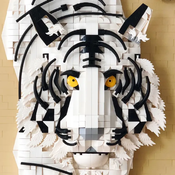 By Dadsbricks
24 comments
Swan Lake, being one of the most popular ballets of all time, is my favorite ballet performance.
Music box is a magical box that most of us may have received as a present, and it has the power of mind refreshing.
In this project, I have combined the two elements and created a music box with the theme of Swan Lake, which tells the story of Odette, a princess turned into a swan by an evil sorcerer’s curse. It is a white-in color music box with several gold decorations on the surface. On top of the music box, there is a pair of swans made in mini scale. It also presents you with the golden lock at the front of the box.
When you open the box, it will show you a ballet stage-like performance with a backdrop of a night with a full moon and one of the world’s most famous castles, Neuschwanstein Castle, in microscale. At the middle of the music box, there is a mechanism that makes the ballet dancer rotates on the round plates like dancing at the stage. The handle of the mechanism is set at the right-hand side of the box.
The minifigure and the round can be stored in the areas besides the central stage.
With the recent creative parts by LEGO and several music-related projects, like VIDIYO, the music box would work with a sound brick so that the mechanism can connect to the sound brick to show a creative music box to us.