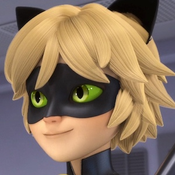 Miraculous: Tales of Ladybug and Cat Noir (aka Miraculous Ladybug) is a Franch cartoon created by Thomas Astruc about two kids called to adventure.

Given that themes like Elves and Friends have found success, I thought it might be fun to expand that world into a show I find very fun and enjoyable.  While the series itself is ongoing and expanding, this project is based on the basic premise of the show rather than any specific story, and so is a decent starting point for those who may not be familiar with or caught up with later episodes.  With several minifigures and locations to choose from, it is meant to provide many options for play experience and the ability to re-enact many of the show's memorable moments.

And now for some info!

Marinette Dupain-Cheng is a well-meaning yet clumsy girl with dreams of becoming a fashion designer.  She always aspires to do the right thing, and despite her somewhat awkward nature she is willing to jump in when she sees someone in need of help.  Skilled at her craft, she just needs to find the right opportunity to show her full potential, and maybe the courage to take those first steps.  Initially indifferent to the arrival of the famous Adrien Agreste, a gesture of kindness leads her to fall in love with him.  Now if only she could get over her awkwardness and tell him!

Adrien Agreste is the son of renowned fashion mogul Gabriel Agreste.  Kept sheltered away from the world by his father for most of his life, he is finally allowed to attend public school, and must find his place within its social structure.  Immensely kind, he never lets his status as a near-celebrity go to his head, instead wishing he could be free of the burden of fame and just be a normal kid.  He admires Marinette's skill and bravery, but despite her crush sees her mostly as a very close friend.  Adrien's feelings are reserved for the mysterious masked girl who is so often saving the day.

Alya Césaire is Marinette's best friend and biggest social support.  She is always pushing Marinette to come out of her shell and take opportunities that are in front of her.  She has a strong sense of justice and uses her journalistic skills to run the Ladyblog, a blog dedicated to reporting on the actions of Ladybug and Cat Noir.

Nino Lahiffe is Adrien's best friend and an all-around cool guy.  A DJ for the school's radio station, he's always ready to be the life of the party.  His laid-back and fun-loving attitude serves as a nice reprieve for Adrien, whose father has a much more strict view of the world.

Neither Marinette nor Adrien are aware that the other leads a double life.  Attending school and navigating the trials of growing up during the day, they often find their friends and city under attack and must transform into their alter egos to defend them.

Ladybug is a superheroine with the power of good luck, and is Marinette's alter ego.  When in this form Marinette maintains her dedication to doing the right thing, but gains the confidence and drive to do so, making her a formidable opponent.  Wearing a spotted red costume, she wields a yo-yo that she uses both as a weapon and to purify captured Akuma.  Her ultimate power is her Lucky Charm, which summons an item that will help her out of any situation she might find herself in.  Her Miraculous is a pair of red earrings.

Cat Noir is a black-clad, cat-themed superhero with the power of bad luck, and is Adrien's alter ego.  Without the burden of his social status on his shoulders, Adrien feels mich more comfortable and at ease behind the mask, but that won't stop him from getting serious if the situation calls for it.  With sharp claws and a sharper wit, he uses an infinitely extendable staff to do battle against Akumatized villains.  His ultimate power is his Cataclysm, which causes the first thing he touches to immediately decay, rot, or break.  His miraculous is a simple black ring.

Included in this design are three locations and six minifigures.

Thanks for reading!  There is a lot more to the world of Miraculous that there simply isn't space for here, either in this text or in the project as a whole, but I hope it has at least captured the heart of what makes the show fun.  If you found this intriguing I'd appreciate if you'd give the project your support.