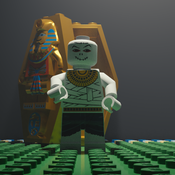 By geoboy2002
13 comments
Years ago, a new World Champion was crowned. Now the racing legends are passing the torch to a new generation of racers. One such legend is the off-road hero, Chip. Now with a son of his own, he trains him in the art of great racing. Now you can take the wheel with either Chip or his son Chase as they drive the Tiger Tracker.
Why I built it: I have nostalgic feelings for Lego Stunt Rally, especially the video game, which i worked hard to win. I thought of continuing the story, set about 10-20 years after the original. One of the ways I could continue the story is to make the futuristic successor to the supercharged Turbo Tiger, a race car that is my favorite one of the Stunt Rally cars. Also, having the son of Chip drive it makes a whole lot of sense, seeing that Chip would have to find someone to continue in his footsteps. Overall, I built this to bring the thrill of stunt racing to a new generation.