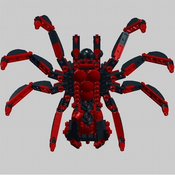 I don't have any anticipation and I don't expect this creation to get a lot of votes. I am just showing them off for your viewing pleasure. Please feel free to comment, share and like them anyways. I never know what to call my creations, if you can come up with a name for the alien species and what these space crafts are called I would greatly appreciate it.

These ships are classified as a light gunship and have a limited range. They typically travel in small squadrons or as escort crafts for their larger battleships. Even though the ship is large for its purpose it is either piloted remotely or by a small skeleton crew. They contain 4 massive fins that are used both as weapon housings and as engines. It also has a single large engine in the back. In the front sits a powerful weapon that shoots out a powerful energy pulse. Alone these ships pose a limited threat, to a knowledgeable crew, but in groups they pose a much larger threat.

Several thousand years ago 4 stars inhabited the same sector of space. One was yellow, one was blue, one was red and one was white. Every year these stars crept closer and closer toward each other. On one fateful night long, long ago all 4 stars clashed and combined into 1 massive star. This newly formed hyper giant was so massive and possessed so much gravity that it eventually collapsed in upon itself and formed a new black hole.

Skip forward several thousand years a few nearby stars, smaller but less massive, began to orbit the singularity. Many of these had planets that supported life and only a few had intelligence. A few thousand years passed and these stars and their orbiting solar systems were eventually sucked into the black hole to never see the light of day again.

On one of these planets lived a very intelligent race who instead of being sucked into the abyss left their world and headed out into the depths of space. After several hundred years this race returned to the singularity to mine it of its energy and to use it as an anchor to send their ships instantly to any point in the galaxy. This race was not alone for something else was lurking in the darkness of space.

Click the links below to view my other Lego creations, digital art and other really cool projects.