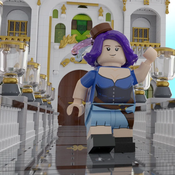 By AmyOak
33 comments
The city of "Intrigue" was built within the crater left behind by a meteor centuries ago but since that time nature has only thrown more trials at the city. The rain has turned acidic and the city have retaliated by creating a shield over their city. the Canopy was built to be a temporary fix but that was almost sixty years ago now and so many buildings have surrounded the core that it is no longer able to close
This model is able to become a full umbrella in a similar way to the modular buildings but this doesn't attach to the modular's
If you like this design and would like to see it become a set please share this around, Thank you!
Mecabricks page:https://www.mecabricks.com/en/models/07vNrMbovAm