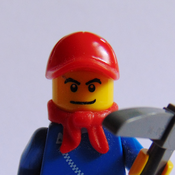 This model of a fossil shop contains four fossils, three of them two dimensional and one three dimensional.
50% of all fossils are flat, in particular fossils found in slate, for example the fossils of the Jurassic Coast in England or Holzmaden in Germany. The three marine predators depicted on slabs on the walls of the fossil shop are ichthyosaurus, plesiosaurus and mosasaurus.

Ichthyosaurus lived 200 million to 140 million years ago from the Triassic through the Jurassic and into the Cretaceous Period, it is a marine dinosaur that lived and looked like a dolphin. The first ichthyosaurus was found in England by the famous fossil collector and palaeontologist Mary Anning.in the early 19th century.
Plesiosaurus lived during the Jurassic and Cretaceous Periods, about 145 to 64 million years ago, although the most famous plesiosaur in the world, Nessie the Loch Ness Monster, was seen alive in the twentieth century.
Mosasaurus was a large sea lizard that lived during the Cretaceous period, 145 to 65 million years ago. It has not been seen alive since.
Finally, the three dimensional fossil in the shop is the missing link between dinosaurs and mammals, Cynodont, a hamster like animal that lived during the Jurassic period.

The fossil shop also contains an amber stand, a couple of shelves with fossils and a cash desk.
There are three minifigures, a shop assistant, a guard and a customer.
The building can be connected to large Lego Creator buildings.

I hope you like the idea and support it.
Thank you for reading.